Author(s): Goselle ON, Amobi LO, Ojile JO, David A, Nanvyat N, Adulugba IA, Kumbak D, Udeh EO, Mbaya YA and Mafuyai HB
Abstract:
A survey was conducted in five microhabitats of Jos North Local Government Area of Plateau State to determine the prevalence and abundance of mosquito larvae in ponds/streams closed to residential areas. The research goal was to describe the pattern of composition of mosquitoes dominated invertebrate communities and to test the abundance of different species of mosquitoes as a measure of identifying which area could be more prone to malaria disease infection if not well managed. The work composed of two questions about community composition and the species of invertebrates at sites: (1). How do the presence of a pond or stream/river near a community support the presence of larvae which is critical for understanding processes affecting adult population; (2). To ascertain if any differences in habitat gradients with populations and community composition of mosquitoes may be important for understanding disease transmission in different kinds of microhabitats which may aid in planning more effective vector control strategies. A breakdown from the collections conducted in the five microhabitats indicated that, of the 3, 110 larval stages collected over three different dates, more number of Anopheles species were recorded in the Tudun wada microhabitat than in other microhabitats. Coincidentally, it was also the area where an unidentified species of larvae were recorded. Fewer numbers of Aedes were collected as compared to the others. In consideration of the instars stages that were measured, it was recorded that more early instars were collected as compared to the late instars. This indicates oviposition is at a climax as compared to the survival of the larval stages. In conclusion, it could be inferred that there is a great invasion of mosquitoes in the human community which calls for a serious concern for governmental and non-governmental organizations to increase more funding to curtail health hazards that could come from mosquito bites.
Related Graphics: Click here for more related graphics 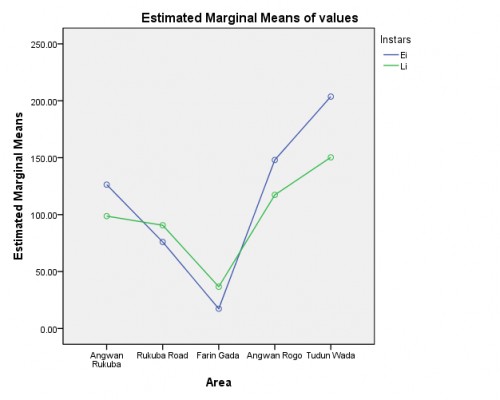